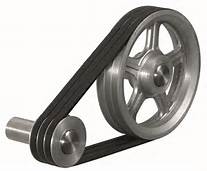 The v-belts are made of rubber with fabric cords to transmit power and its covered with a protective layer. The cords transmit the force from the driver to the driven pulley, thereby transmit the power. The number of cords are increased based on the force requirements. The rubber layer transmits the force in cord to the sideRead More

Select your currency
PKR Pakistani rupee
USD United States (US) dollar
We use cookies to ensure that we give you the best experience on our website. If you continue to use this site we will assume that you are happy with it.Ok